skip to main | skip to sidebar

We went to our first parade with Sugar.  It was in my favorite city, Virginia City, NV.  Virginia City is an historic city filled with lots of shopping, historic places, and, of course, ghosts.  Millions and millions of dollars worth of gold and silver was mined here in it's heyday.  And thousands of people died underground in the mines, as well as above ground it the many bars and brothels that abounded during it's heyday.
The parade coincided with the Mountain Oyster Festival.  While I'm not inclined to eat any testicles, be they sheep, pig, or beef, the aroma of them cooking smelled good and tempting - but not tempting enough to actually eat them!
When we arrive in Virginia City, we decided to park at the end of the Parade Route.  We had the entire parking lot to ourselves to decorate the carts and the horses prior to setting out for the beginning of the parade.  We had an uphill climb after leaving the parking lot for the parade line-up.  This gave our horses a chance to expend some of their energy and excitement prior to the parade.  Sugar was so worn out from the uphill climb, she stood and snoozed for the hour prior to the parade even with flags flapping in her face from the entrant in front of us.  She was so calm through out the entire Parade, that I suspect she has been in parades before.  The ONLY thing she looked at was the first manhole cover we passed, and the rest she barely noticed.
Pictures from the day can be seen here:
Sugar was so good, I am hooked on mini's and can't wait for our next parade!

Hello,
I have a question about your blog. Please email me!
Thanks,
David 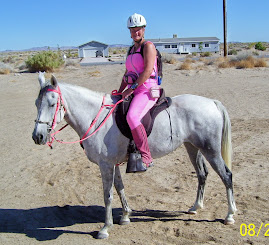 Desertduty
My name is Susan, and I have 2 major passions: Horseback Riding and Breast Cancer Awareness. I am a mammographer in my small town, and I try to promote Breast Cancer Awareness when riding. I mostly trail ride and have started doing Limited Distance Endurance Riding on Whisper, my 1/2 Arab 1/2 TWH mare and Andi, my palomino Icelandic gelding. I live with my husband, Bruce, and our dog, Hoss and cat, Nicholas on our little 10 acres here in the high desert of Fallon, NV.